Cultural cooking app is a recipe for language learning success

Linguacuisine allows users to follow a recipe in a different language on their smartphone or tablet - learning as they go with the help of video, photos and text instructions.

The app was developed during a two-year project involving local charities as well as partner universities in Greece and Italy and funded by a €320,000 Erasmus+ grant.

"Following a recipe brings a new language to life for a student or learner, rather than being something they learn by just sitting in a classroom," said Paul Seedhouse, Professor of Educational and Applied Linguistics. 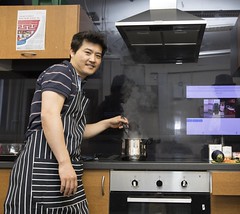 “At Newcastle University, linguists and computing scientists have been working together for the last nine years on what language learning might look like if we asked what young people are interested in as a starting point.

"Clearly, they are interested in using digital technology, in overseas travel, in global cuisine and cooking, in hands-on experiences and doing things.

“We used these interests as the basis of our solution. Many technological approaches to language learning involve learning in a virtual world, but we wanted to use language to carry out a real-world, practical, engaging task with a tangible end-product.

"Through Erasmus+ vocational education and training funding we partnered with organisations and universities from the UK, Greece and Italy. Together we worked with citizens, refugees, asylum seekers and migrants who do not take much part in the digital world, to help us design a solution.”

The result was the Linguacuisine app, which engaged learners in a foreign language in their own kitchens.

Users can choose from a wide range of recipes in 10 languages - including English, Greek, Spanish and Italian - and it guides them through the practical task of cooking a meal as well as learning aspects of the chosen language, culture and cuisine.

"Linguacuisine tackles the universal problem of classroom language teaching, namely that students are rehearsing using the language rather than actually using the language to carry out authentic real-world actions with a tangible - and edible - end-product,” said Professor Seedhouse.

“Using the recipe builder app to upload your favourite recipe, from your own country, in your own language means that anyone, anywhere in the world can watch the videos and listen to the audios. This makes it an ideal tool for promoting cultural exchange and understanding, really bringing culture to life as well as being a great motivator to learn.” 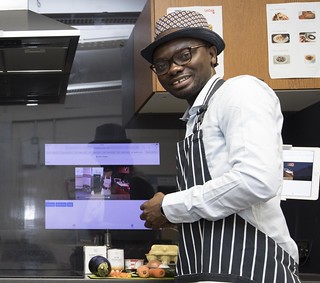 Among those involved in the design and trialling of the app was Wakanda Pouo, whose recipe for a baked dish of eggs, chicken, bacon and vegetables is based on an African meal.

Wakanda, whose first language is French, said: “This is a great idea and I’ve liked being involved. I’ve also enjoyed adding my own recipe so people can try something different.

"People who first come to this country may feel nervous about trying to speak English if they only know a little, so the app gives them a way to try it out by themselves.”

Wakanda, who arrived in the UK as an asylum seeker, was a legal advisor in his home country and believes that the experience will help him to rebuild his career.

He learnt new digital skills, such as video shooting and editing and developing apps, and credits Linguacuisine for pushing him beyond his comfort zone.

"I got to meet new people but, more importantly, I have learnt so much," he said.

“The results were impressive and included improvements in participants' digital competence and learning of foreign languages, as well as increased social inclusion and enhanced employment prospects," said Professor Seedhouse.

"The refugees and migrants had increased integration in the host culture and increased their self-confidence at being able to portray their own language, cuisine and culture online.” 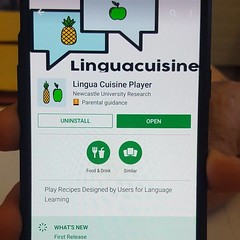 Action Foundation, a charity which supports disadvantaged refugees, asylum seekers and other migrants across Tyne and Wear, was one of the UK partner organisations in the initiative.

Project manager Nicola Brooks said: “We were able to offer some of our learners the opportunity to participate in something different; to improve their digital skills, which were varied, and their English language, and work with native English speakers and to become involved with a prestigious British university.

"It was noticeable that participants’ confidence in using the software increased, as well as their confidence in presenting and communicating, both on and off camera, as they collaborated to create the video sections for the recipes.

“Being a partner in Linguacuisine has also opened doors for Action Foundation, not least in our partnership in another Erasmus+ project. One of the key values of both is the creation of something which will be accessible and useful to people outside the project, long after the projects are over.”

The results were impressive and included improvements in participants' digital competence and learning of foreign languages, as well as increased social inclusion and enhanced employment prospects

Also involved were learners and staff from the North East branch of the Workers' Educational Association, the largest voluntary sector provider of adult education in England and Scotland.

Senior Area Education Manager Mike Rugg said: “Students on this project increased their confidence through learning new skills such as storyboarding, using an iPad and apps, creating and designing recipes and developing language learning materials, which has enabled them to progress in their learning and opened up opportunities for them.

"They were motivated to take up further learning and they have worked together collaboratively with people from different countries and cultures, which has developed their team working, language and social skills, along with an increased knowledge of recipes and food from around the world.

“The staff working on the project have gained skills and knowledge in organising a large scale, high profile event, which included working with organisations from the public and private sector. We’ve developed marketing materials to showcase the project and as a result have raised the profile of our organisation.”

Find out more about Vocational Education and Training experiences by visiting our stories page.