Students across the United Kingdom, as well as in Ireland and France, learnt how to recognise extremism and fake news as part of a ground-breaking Erasmus+ project.

Lancaster Royal Grammar School (LRGS), one of the UK's top grammar schools, led the Parallel Histories project which offered a new way to study the history of conflict.

Louise Wareing, Erasmus+ Coordinator at the school, explained: “The driving force behind the Parallel Histories project is the need to address two of the fundamental problems of our age: extremism and fake news. Strong democracies rely on citizens who can distinguish between arguments and opinion, between real news and fake news.

"Our inaugural syllabus teaches history which is still contested, controversial and relevant to those studying it. It challenges pupils to study history from conflicting perspectives.” 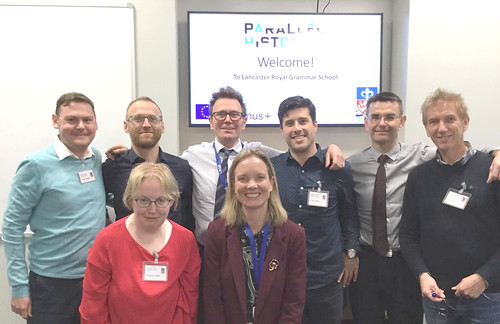 LRGS partnered with two other schools, Sacred Heart School in the Republic of Ireland and Lycée Frederic Faÿs in France, and all three were able to share their different national and cultural perspectives.

“The evidence-led approach we use promotes safe debate and discussion, on what is often a controversial topic, that resonates with students,” Caroline Ryder, Erasmus+ Coordinator from Sacred Heart School commented.

“It offers exciting and inspirational opportunities - to both teachers and students - to develop beyond the confines of national and exam curriculums. We are teaching how to think, not what to think.”

In the first year, the partners taught the contested history of a current conflict (Arab-Israeli) in order to understand how each side’s historical narrative has been constructed. In the second year, pupils applied what they learnt to a contested history or contemporary issue ‘nearer to home’, exchanging findings and resources for discussion and debating with students from the partner schools and elsewhere.

All students have gained in confidence from participating in the project

"Overall, I have found that the programme has opened my eyes to current world issues and has shown me the importance of listening to more than one side of the story," said Luisa Woods, a pupil at Sacred Heart School.

“Older students have particularly enjoyed devising new materials and leading the research into and presentation of topics which rarely feature on any national or exam curriculum,” Louise highlighted. “This is essential to their understanding of how national identities are moulded and constructed.”

Hugh Castle, who led the project and the implementation of the Parallel Histories programme at LRGS, said: “This new approach to studying controversial and ‘live’ historical topics works equally well in classroom, online and in blended learning situations, which has proved very beneficial during the Covid-19 restrictions.”

The fourth partner in the project was a technical organisation, DHE Solutions UK, who developed a Moodle learning platform so that students could learn and 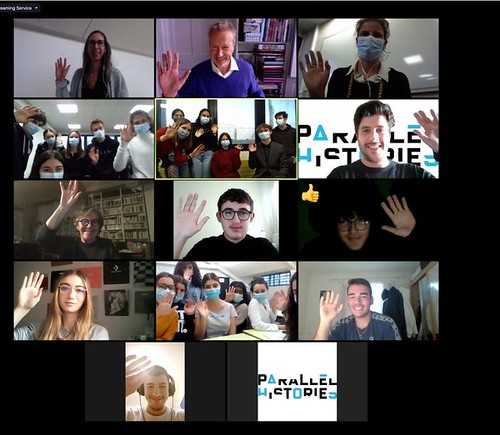 “The platform not only encourages remote teaching and learning but allows students to interact across the countries involved, in debates and various other activities. It has enabled the project to continue despite the lockdowns and travel restrictions,” explained David Evans from DHE Solutions.

“I was fortunate to be able to take part in the online debates during lockdown. It was great to receive feedback from teachers from other schools and has allowed me to develop both in public speaking and essay style,” said Filip Stuchlik, a pupil at LRGS.

"The online debates helped me develop skills, such as debating, which would have been hard to practice otherwise," said fellow pupil Alex Armer.

Louise agreed: “The online debates have been very popular; they are informal, run in a supportive atmosphere and students receive expert feedback on next steps. Students from the three schools have been joined by others from across UK and as far afield as Turkey in these debates throughout lockdown. It has been brilliant to see students collaborating with one another.”

Theo Cohen, from Lycée Frederic Faÿs, said: “The French students were the only non-English speaking participants to the online debates and this experience has been unique in gaining confidence in themselves as well as improving their command of a foreign language.”

“At first, I was so scared to take part in a debate of such a controversial topic and in a foreign language on top of that! This is so new to us. But I am so proud to have overcome my initial fear and be able to talk to European students!” said Hiba Fatnassi, a student at Lycée Frederic Faÿs.

LRGS developed a 'Northern Hub' of schools around Lancaster as a result of the project and Parallel Histories has spread even further, with 120 schools across the UK adopting the approach so far.

“It was a great experience to be involved in Parallel Histories. Getting to travel to a variety of schools across the north west, as well as to London for the annual conference, and to teach younger students was a particular highlight. I loved seeing them progress from week to week, in both their understanding and debating skills,” said Eleanor Rowe, a pupil at LRGS.

"I was also able to improve my own debating abilities by competing against multiple foreign schools during lockdown, which was challenging yet incredibly enjoyable, especially as it was one of the few activities to continue through the pandemic."

“All students have gained in confidence from participating in the project," Louise said. "They are more comfortable in collaborating with students from different age groups, cultures, religions and nations. They have gained experience in public speaking, debating, listening, questioning and social, civic and intercultural understanding.” 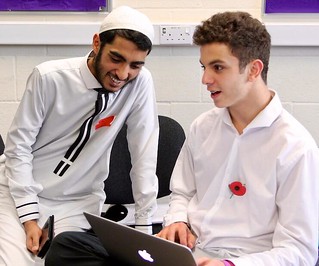 The project received widespread acclaim from politicians, ambassadors, academics and in the media.

So successful was the implementation of the Parallel Histories curriculum at Lycée Frederic Faÿs that it was adopted as part of the final year curriculum across France.

Louise concluded: “We have benefited from cross-collaboration, learnt about different national contexts, developed new methodologies and materials, coped with unforeseen challenges, built relationships, and, while able, had the opportunity for European travel.”

Want to see what other schools in the UK have achieved? Visit our schools stories page!